This isn’t the first time we’ve faced the daunting task of training millions of adults to master a complex technological skill. In the late 19th and early 20th century, the US faced a similar challenge to the one posed by Emerging Tech today.

A modern society can’t function unless farmers are productive enough so they can feed the vast majority of people who no longer work the land. To pull off this agricultural revolution, millions of farmers had to master new skills and knowledge – the key elements of soil science, plant science, entomology, and a wide range of other information and practices that made up modern farming practices.

From a distance, teaching farmers about modern farming practices might seem much easier than teaching programming to people who’ve never written a line of code. But the gap between what most farmers did and modern agricultural was so large and difficult to bridge that it took more than 50 years of large-scale experiments to figure out how to do it.

For example, after many years of volunteer-driven efforts to spread modern practices, in 1862 Congress and the Senate reluctantly concluded that a more dramatic government intervention was needed. The Morrill Act created a system of land-grant colleges to teach agriculture and other practical arts. The Act was driven in part by the belief that the practice of modern agriculture was so complex that only by helping many people gain a college degree in it could the US transform the world of farming. But these and other efforts failed to train enough farmers to substantially change farming practices.

Finally, in 1914, the US came up with a strategy that worked. Drawing on the lessons learned from years of experimentation by individual states, the Smith Lever Act created a community-oriented approach called Cooperative Extension Services.

Extension Services were successful because they created a rich web of support to help farmers make the transformation to modern farming. In doing so, they employed 4 strategies:

The Limitations of Extension Services

But Cooperative Extension Services also has a more complicated lesson to teach us. Extension Services has demonstrated that it’s a remarkably effective way to serve a specific audience. However, at different times and in different places in the US (and around the globe), it has often been designed to help some audiences while inflicting terrible harm on others. For example:

At the same time, the most bottom-up, grassroots-oriented traditions of Extension Services have become so important to today’s efforts to reduce global poverty that in 2015, Bill and Melinda Gates argued that

investing in extension so that it helps more farmers in more places—women as well as men, smallholders as well as more commercial farmers—is the only way to reap the full benefit of innovation.

How do we embrace the best parts of Extension Services’ traditions and avoid the worst? By learning the lessons of another remarkable educational effort: the 1960s Civil Rights Movement’s Citizenship Schools. 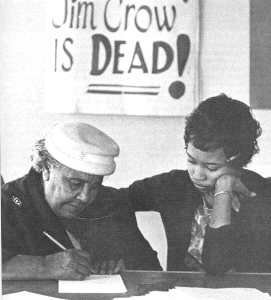 One of the major challenges facing the 1960s Civil Rights Movement was how to overcome voter suppression laws designed to stop African-Americans from voting by requiring that voters must be literate. How could the movement help African-Americans throughout the rural, agriculturally-dominated South to learn to read and write in a relatively short period of time so they could build political power? The solution: Citizenship Schools.

When the Internet first took off, it was sold as a tool for empowering everyone; instead, it became one critical foundation of an economy where communities from Harlem to Harlan County were left behind. If we don’t want to repeat that mistake, we must ensure that every community has a seat at the table – and to do that, we’ll need to draw on the lessons of Citizenship Schools. Only by ensuring that there are enough people in every community who understand both how to code and how to fight for their community’s future can we be confident that emerging tech opportunities will be accessible in every community and that every community will have a real say in who benefits from this new economy.

Ultimately, the most important lesson we can learn from Extension Services and Citizenship Schools is that we can’t be afraid to think big.

We have a rare opportunity to make more emerging tech jobs more accessible today and to create a better future for all tomorrow. But to seize it, we need to think boldly, dream, and then act on a large enough scale to realize those dreams.

Next: Caveats and Scope
Last: Is Truly Democratizing Emerging Tech a Pipedream?
Up: Introduction